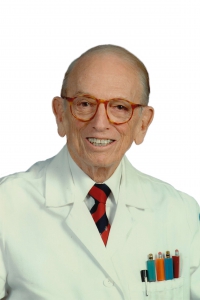 Dr. Lincoff ‘s dedication to patient care, education, and research has made him a role model and inspiration in the field of ophthalmology.   A true visionary, he pioneered an understanding of the patterns of retinal detachment.

He developed minimal surgical techniques for retinal detachment that have been adopted by ophthalmologists throughout the world. Most noteworthy, he pioneered the use of cryopexy for retinal detachment to eliminate scleral abscess that he related to the scleral necrosis caused by diathermy.  He later noted that cryopexy could be used to destroy retinoblastoma.  He developed a soft silicone sponge to buckle retinal tears.  The sponge that bears his name serves to close retinal breaks and reattach the retina without draining subretinal fluid as proposed by Ernst Custodis.   He designed spatula shaped needles to sew the sponge to the wall of the eye.  The needle reduced the incidence of accidental perforation. In 1971 his classic paper on “Finding the Retinal Hole” was published and is universally taught to ophthalmologist in training and continues to retain its relevance. In a report to the American Academy he demonstrated that it was possible to substitute a temporary balloon for the silicone sponge to repair simple detachments.  After the retina reattaches, the balloon, which bears his name, is withdrawn leaving a completely undistorted eye.  He pioneered the use of the straight chain perfluorocarbon gases for the treatment of complicated detachments.  Subsequently, he demonstrated that intraocular gas was not entirely benign and could be the precursor of preretinal proliferation.  In 1988 he became interested in retinoschisis, defined its presence in optic pit maculopathy and currently is proposing a new method for treating the macula elevation emanating from retinoschisis.

Dr. Lincoff is the author of more than 200 scientific papers and chapters in ophthalmology textbooks on retinal disorders.  His research has been awarded most of the prestigious prizes in the field of ophthalmology.

Harvey Lincoff continues to combine his clinical practice with research: His recently published research in the journal RETINA describes a new position of gaze, based on geometric calculations for pneumatic displacement of subretinal hemorrhage in the macula.

He is studying eyes with optic pit maculopathy for the source of the subretinal fluid and proving the efficacy of initial ambulatory binocular occlusion for retinal hemorrhage and detachment.